If you’re searching for a temporary house that’s also economical, consider a mobile home, which is also known as a manufactured home officially. These homes cost the same as traditional houses, but they have more square footage and pay less in property taxes.

But these homes have some rules that you have to follow. Because the structure of these prefabricated houses is not designed to sustain a significant amount of weight, it is essential to have a good understanding of how much weight indicates an unsafe level.

How Much Weight Can a Mobile Home Wall and Roof Hold?

A mobile home’s walls can safely hold between 50 and 100 pounds. On average, a roof can support 20 pounds of weight per square foot. A high-end roof may hold 30 lbs./sqft. Keep these boundaries in mind at all times to keep yourself safe from harmful consequences. 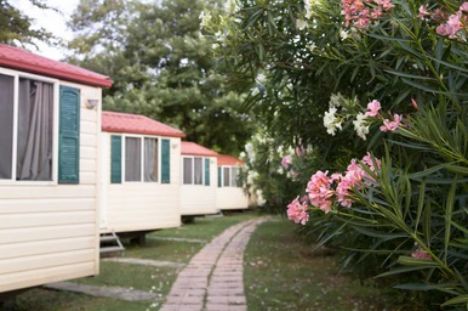 The interior structure of a heavy item might help you determine whether or not it can be hung on the wall. When walls are built on assembly lines, they usually have a wooden frame with several “studs” to hold them up.

Hooks that are detachable and have sticky glue on the backs are often suitable for attaching lightweight things to the wall. If you want to hang something a little bit heavier, screw the hook right into the drywall.

But anything that weighs more than 50 pounds, like a TV, should be attached directly to the wall studs. Take a stud finder to locate the studs, and then screw the object into 2 or 3 studs such that its weight is distributed equally across all of them.

Even though most mobile home roofs could smoothly maintain a load capacity of 20 pounds for every square foot, this would not mean the weight of the product itself. The term “live load” refers to the additional weight that must be held by the roof in addition to the weight that is currently being carried by it.

It’s also important to know that it’s not easy to figure out how much weight a trailer home roof could hold because the value changes vary according to the form of roof and how good it is.

For instance, a sloped roof can sustain more weight than a flat roof. A more recent roof will have increased capacity to support weight in comparison to an older one. Because of this, it is best to contact a constructor if you have any doubts about your roof’s ability to support a certain weight.

Does a mobile home have load-bearing walls?

Load-bearing walls are made to support the weight of anything built on top of them. This structure is usually the roof. Then, the weight is put on the foundation below.

Unless they are double-wide, most mobile homes don’t have load-bearing walls on the inside. The term “double-wide” refers to the size of the floor space, which is usually between 1,100 and 2,400 square feet.

There are, however, a few walls in a mobile home that are considered load-bearing.

What is the best way to hang anything heavy in a mobile home?

Follow these easy procedures to secure anything weighing more than 50 pounds to a mobile home’s walls:

How can I determine whether a wall in a mobile home is load-bearing?

Since load-bearing walls support the roof and everything above it, it’s critical to know the difference. Consider this before doing something drastic like demolishing your walls.

Use these ways to assess whether a mobile home wall is a load-bearing.

Most of the time, the load-bearing walls of double-wide houses are the exterior walls and the ones that run parallel to the marriage line. If you have a double-wide mobile home, start with these walls.

If your house doesn’t have a basement, look right under the floor. Investigate if there are any beams or columns that run the length of the room from one side to the other. In most cases, they are composed of steel and are located immediately above the load-bearing walls of the structure.

As an alternative, you may look up in the attic and see which way the beams are pointing. A load-bearing wall is one that is perpendicular to its joists or beams.

The most accurate and dependable way to locate load-bearing walls is to check your home’s floorplan. Using the original supporting joists, you may determine where the walls are located.

If you don’t have your home’s blueprint, contact the manufacturer.

How do mobile homes’ roofs look?

The shapes of mobile home roofs have changed many times over the years. Before 1976, most roofs on homes were either flat or curved. Metal sheeting or asphalt coating would be used to cover these areas.

Most houses built after 1976 have roofs that are more pointed or pitched. Similar to previous homes, their roofs would be metal and asphalt. Shingles are things that overlap, like small rectangular tiles.

Their insides are made up of trusses, which are huge triangle-shaped beams. For double-wide homes, on the other hand, the roofs were made with half trusses that, when put together, made a standard full truss.

What kind of roof is best for a mobile home?

For your mobile home, it’s important to get the best possible roof. Before installation, you should think about the roof’s durability, shape, and construction, as well as your long-term goals.

Asphalt shingles are usually the most cost-effective and reliable material. The small rectangular tiles that make up these shingles keep piling on top of each other. Most of the time, asphalt is used to make these tiles.

In addition to its aesthetic value, the roof’s design has a structural purpose. In the event of a leak, flat roofs, for example, will need more frequent repair.

This is because the flat structure doesn’t have a place for rainwater to go. Drainage is not a problem for roofs with a pitch or a peak. Because of this, pitched roofs are a better choice.

Can a TV be mounted inside a mobile home?

A typical television set weighs around 75 pounds, however, this might vary based on the model. The weight of this item is more than fifty pounds, which is the limit for what a single hook can hold into the wall of a mobile home.

While you can place a TV on a mobile home wall, the method is more complicated.

Because the walls of prefabricated homes are not designed to be able to withstand a great deal of weight, anything that weighs more than one hundred pounds is seen as dangerous and therefore to be avoided or discussed with a constructor before being installed.

But a TV usually weighs less than this, and you can mount it on the wall by finding the studs first. A stud finder, which you can find in most hardware stores, can be used to do this.

After that, all you need to do to hang your television is screw on some hooks into the studs.

Is it possible to walk on the top of a mobile home?

Mobile home roofs may be walked on, according to the manufacturers, but safety measures should still be used. Depending on the year the mobile home was built, the roof might either be flat or pitched.

Although these roofs may hold your weight, it is best to use a ladder to do repairs. This will keep the roof from getting broken.

If you have to climb up on it to repair and maintain it, make sure to check the beams and trusses first to make sure they are in good shape.

As a general rule, mobile home walls can hold between 50 and 100 pounds of weight per square foot. The roof could reliably hold 20 pounds or even close to 30 pounds for every square foot of live weight. Putting anything heavier on the wall could cause problems with the structure in the future.