Duvet covers are an important consideration when purchasing a duvet or comforter for your fresh new apartment.

If you don’t know what the difference is between the two, you’re not alone. Many people will use these words interchangeably. Duvets and comforters, on the other hand, are the complete opposite.

So, let’s find out if comforters and duvets need duvet covers.

A comforter doesn’t require a duvet cover or other cover after you buy it. If you like, you may cover your comforter with a duvet cover. When it comes to a duvet, however, the cover is a must-have since it protects and adds style to the duvet. 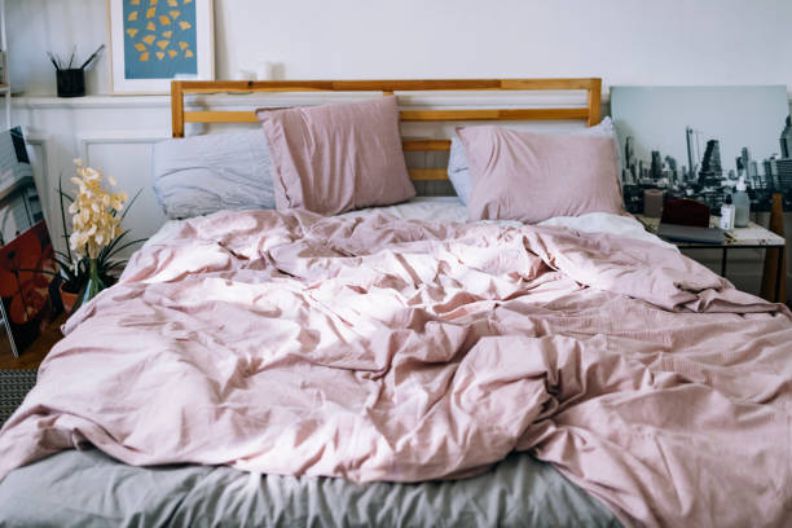 The duvet cover is like the pillowcase for the duvet. The outer covering that goes over a duvet and is fastened with a zipper is referred to as a duvet cover.

Duvets are expensive and hard to clean, so duvet covers have become a good idea because they safeguard the comforter and can be taken off and washed.

In addition, you don’t have to completely redecorate your room to make your bed and the space seem different by just switching out your duvet cover.

The duvet should fit snugly inside a removable, machine-washable duvet cover. A duvet cover also makes it easy to switch up the look of your bedding by simply swapping out the fabric used to make the cover. This makes it easy to change from one season to the next.

Are duvet covers needed for comforters?

Comforters don’t need a duvet cover because they already have one built-in. You can, however, put a duvet cover over your comforter to make it look nicer and make it last longer.

Duvet covers are stylish and give your bedding a different look. Comforters are expensive, so it can be hard to buy more than one. The duvet covers, on the other hand, maybe purchased at prices that are not too expensive and can be interchanged depending on how one is feeling at any given moment.

For one thing, a duvet cover can be machine washed, which is a big plus. Duvet covers may be washed in most household washing machines, but the comforter needs a machine that is either commercial or industrial in size.

Duvet covers are required for duvets, while comforters don’t need them. Duvet covers make life simpler and provide you with more alternatives for your bedroom.

Duvet covers, on the other hand, are just light pieces of fabric, so you have more options. In the summer, you may replace your heavy-down blanket with a light duvet cover.

Duvet covers are an essential feature of every bed set because of their many benefits.

Are covers needed for all duvets?

Duvets are made of two main parts. The duvet insert is composed of wool or other synthetic fiber, whereas the duvet cover is made of fabric and covers the insert. Almost every duvet needs a cover to keep it safe.

The inserts of a duvet are not meant to be used on their own. It needs to be covered.

In other circumstances, though, the duvet cover might stand-in for a blanket or comforter when nothing else is available. When you just use a duvet cover, the comfort and strength of the insert are lost.

So, the best thing to do would be to cover your duvet.

Can a comforter be used without a duvet?

A comforter, as opposed to a duvet, is designed to be used on its own without a top sheet. It is common for a comforter to have a fashion fabric on the outside that isn’t meant to be covered and to have a lower content than a duvet.

So, you don’t need a duvet cover to use a comforter.

But you can change it up by putting a duvet cover over the comforter. It also keeps the comforter safe and makes it easy to wash.

Why does a duvet cover matter?

For the following reasons, we need a duvet cover:

Have you ever tried to clean a comforter on your own?

First of all, it’s almost impossible to fit everything into your washing machine. When that happens, drying becomes a real nightmare. With a duvet cover, you can stop worrying about housekeeping.

Duvet covers can be washed in the machine and are just as easy to take care of as sheets. Take off the duvet and wash the cover. A new room will be yours in no time.

The second layer of defense:

No matter how careful you are, you have to live in your bedroom. This means that body oil, dirt, food, drink, and makeup all end up on your comforter, covering up the once-beautiful pattern.

Duvet covers protect this expensive purchase. You can buy a nice down comforter without worrying about stains or tears if you have a duvet cover.

Easy and comfortable to the max:

Let’s be honest: a lot of comforters don’t make you feel very cozy. Most of the time, this occurs as a result of retailers cutting corners on the filling to provide an appealing visual presentation.

A duvet cover will keep it from happening. When it comes to down comforters, you don’t have to worry about how they look. Then cover it with a duvet that matches your décor.

If you want to change the look of your bedroom seasonally, keeping 3 – 4 comforters might use a lot of room. Even the biggest linen closet couldn’t hold that much fluff.

When you buy duvet covers, you just need one comforter. Storage space may be used to rotate duvet covers, which take up less area than a single sheet.

How does a comforter differ from a duvet?

Here are some important ways that a duvet is different from a comforter.

A comforter is meant to be used as a whole. It is one piece that is quilted all the way through. Instead, a duvet is meant to be utilized with a top quilt, coverlet, or other decorative covering.

This makes it easier to use a comforter, but it’s easier to clean a duvet.

Find a big enough washing machine to wash a comforter. For duvets, all you need to do is wash their covers. So, in reality, duvets are much easier to clean than comforters.

In addition, considering that a duvet was designed from the beginning to be used on its own without the need of an extra top sheet or blankets, it has the potential to keep its user warmer than a comforter would. You can include them like a lot of other people do.

There are prices for duvets and comforters that work for everyone. A duvet cover, on the other hand, may increase the entire price.

Comforters may also get worn out and need to be replaced. There are several ways to save money on a comforter, such as purchasing it with sheets and cushions.

Each item of bedding may be purchased separately at a higher cost, but these sets save money.

A duvet could be a good choice for people who like to change their bedding and bedroom decor often. In contrast to a duvet, updating a comforter is not as straightforward as putting on a new duvet cover.

Setting up the bed:

When it comes to getting ready for bed, one of the trickiest steps is covering your mattress with a duvet cover. Some buyers like how easy it is to put together a comforter, which only needs a few things.

Do you prefer a duvet or a comforter?

There is no right or wrong answer; it’s totally up to you. Most of the time, a duvet is fluffier than a comforter. Because it’s two pieces instead of a single piece like a comforter, it’s not ready to use right out of the box.

If you are looking for anything uncomplicated and simple to make use of, then you should consider purchasing a comforter. It looks like it has layers and arrives in a set of two that match the bedding’s entirety.

For those who like something simple to clean and maintain, a duvet is a superior option. Plus, a duvet makes the bed look soft and fluffy.

Look at your requirements before looking for something better all around; this is a more effective approach.

Is a duvet included with the duvet cover? Does the cover of a duvet come with the insert?

It is common for duvet sets to include a duvet insert, a duvet cover, and two or more pillowcases.

Sets typically come with the covers and matching sheets; the duvet insert is usually sold separately.

Do you need a duvet cover for a down comforter?

A duvet cover isn’t necessary for down comforters since they’re already prepared for use. But you can protect your comforter and make it last longer by putting it in a duvet cover.

Do duvet cover work without a duvet in them?

A duvet cover can be used as a quilt or as a separate piece of bedding. It is possible to utilize duvet coverings on their own, particularly in the spring and summer.

In conclusion, a duvet needs a duvet cover because it was made to go with the rest of the bedding, not on its own. Comforters don’t need duvet covers. It’s important to remember that a duvet cover provides an extra layer of protection and versatility for your bedding, allowing it to be used with either set.