No, that’s the short answer. If you can, you should do so as not to overload the circuit. Most fans do not consume too much electricity. Remember to use less power on the same circuit while using the ventilation fan. You must use a dedicated circuit if you want to install a microwave there in the future.

A microwave uses between 5 and 10 amps of electricity. So, in most cases, you can safely have a range hood and a microwave on the same circuit. Before you do this, check the manual that came with your device or talk to an electrician.

With a 15-to-20-amp circuit breaker, you shouldn’t put an electric range and a range hood on the same circuit. Electric stoves use 30 to 50 amps, so the circuit breaker would occur.

Range hoods do not need to be on a separate circuit; they can be hard-wired or plugged into the socket of a lighting circuit. Even though it’s technically possible to plug it into a regular kitchen outlet, it’s not a good idea due to restrictions. 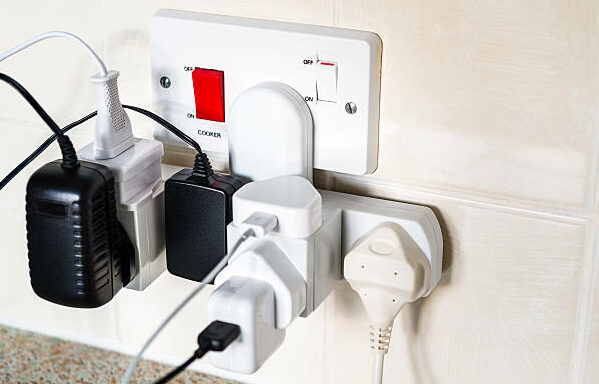 How Many Watts Does a Cooker Hood Need?

On average, 105 watts of power are used by an extractor hood. Their power varies from 65 to 300 watts. Larger range hoods will use more power, perhaps up to 300 watts, because they are larger and draw in more air.

The power used by your cooker hood depends on its type and size. If you have a small custom wall-mounted range, it probably used less energy than a large custom or professional range hood.

If you have a large kitchen, you’ll need a range hood that can handle the pollution your cooking causes. This means that it will probably have a high extraction rate of around 700 m3/h. The more power the hood uses, the faster it goes.

That number of watts might seem like a lot, but when you compare it to other devices and think about how much it costs in total, it’s not that much. The average rice cooker uses 105 watts per hour, which means a small range hood with a low extraction rate doesn’t even use as much energy as this small appliance.

Additionally, an appliance that uses 300 watts of electricity per hour will typically cost the owner between 3 and 7 cents per hour. It only costs $10.95 to $25.19 per year.

So don’t be afraid to buy a range hood if you add the amount it will add to your electricity bill. Appliances like an air conditioner, water pump, and washer/dryer will cost you a lot more than this handy kitchen tool.

Where Should the Kitchen Hood Outlet Placed?

How you configure a range hood depends on how your home is wired and what type of range hood you choose. Most of the time, a range hood does not need its circuit and can be hard-wired into the system already in place.

But if you already own or want to install an over-the-range microwave oven, you will need an electrical outlet.

The best place for an electrical outlet is inside cabinets that go above the hood or to the side of the hood itself. This outlet must be wired on its line. The outlet must also have a ground. This will ensure that the hood is installed securely.

One of the most common mistakes people make with range hoods is making them too big. Even a “commercial” range in a home doesn’t need a commercial-size hood that can extract more than 500 cfm of air. Unlike the home, where you don’t have to worry about cooks being exposed to cooking smoke every day.

A commercial range hood is used 6 to 12 hours a day, with the cooking appliances underneath being used permanently, and must follow OSHA guidelines for exposure to cooking smoke during this entire time.

Additionally, a bigger range hood must be carefully installed concerning make-up air so that even a moderately airtight home does not have dangerous back-drafting from air-burning appliances. A smaller hood fan (200-300cfm is sufficient) that has high capture efficiency and minimal static pressure loss in the ductwork is preferable than larger hood with low capture efficiency.

Knowing how many amps your range hood uses is crucial whether you want to plug it in or hard wire it.

When people buy a range hood, they often forget to look at the wiring and the amperage. Before installing your range hood, check with the manufacturer if it needs to be hardwired into your home’s electrical system. If not, you can plug it into a 110V outlet. Either way, you’ll want to be as close to the outlet you’re using as possible.

A range hood is a great addition to any kitchen, but it can be frustrating to find that the circuit breaker can’t handle the extra load after you’ve already spent time and effort installing it. Before you put on your hood, you should check what other appliances are on your circuits.

It is dangerous to put too much electrical appliances on single circuit breaker. So, if you don’t know what to do, talk to an electrician.