A container that serves as a reservoir, as well as a pump, is included with kitchen sink soap dispensers. Liquid soap has been poured into the container. To use it, you must push down on the pump with your finger to release the soap from the dispenser. They are simple to use and are frequently installed near the faucet. 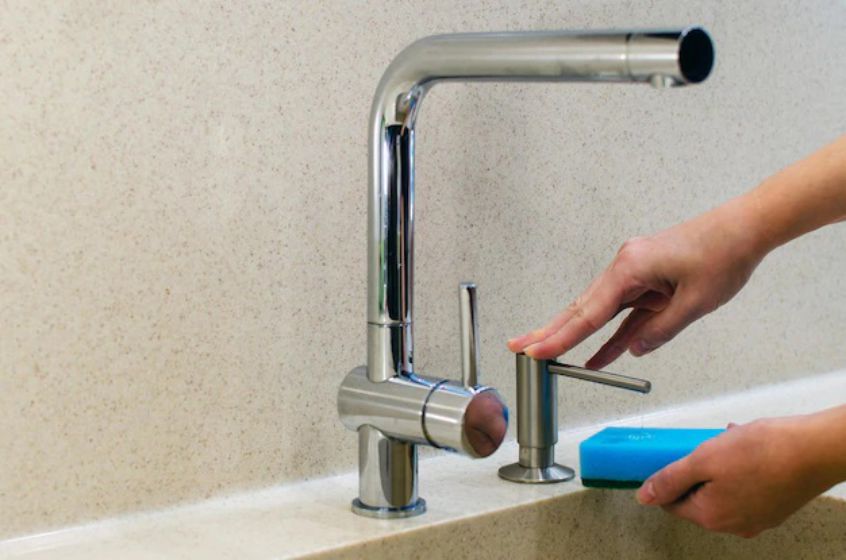 Dispensers for soap are a nice addition to any kitchen sink. It’s always better to have a full container of soap so we don’t have to replenish it all the time. They come in a variety of kinds and varieties to pick from, in addition to being convenient. You may even match them to your countertop or faucet.

There are a few distinct styles of soap dispensers for the kitchen sink. For all varieties, the fundamental mechanism is the same. On the counter of your sink, you may find traditional glass or plastic bottle dispensers. Some come with a tray and come in a set.

Furthermore, you have the option of placing your soap dispenser next to your faucet or mounting it near the sink wall. Metal dispensers endure longer than plastic dispensers and are less likely to clog or froth.

Is the soap dispenser located on the left or right side of the faucet?

Soap dispensers may be placed next to each other in a kitchen with two sinks side by side. Each dispenser will be located on the faucet’s left side.

It’s vital to know that there are no hard and fast regulations about which side of the faucet soap dispensers belong. You are free to place it anywhere you choose, as long as it is easy to access.

What is the ideal distance between the soap dispenser and the kitchen faucet?

The majority of individuals like their dispensers to be as near as possible to the sink. This might be anywhere between 4 and 6 inches away from the faucet. The closer it is to the faucet, the less likely you are to splash soap all over the sink basin when washing your dishes.

People who don’t like the crammed-in fittings want it a bit farther away, some as much as 10 inches away. Installers also suggest that you leave a 2-inch gap between each of your sink connections, whether it’s the soap dispenser and the sprayer, or the sprayer and the water control.

On a kitchen sink, how do you install a soap dispenser?

Installing a soap dispenser may be done in four simple steps.

Step 1: Make a hole in the countertop using a drill.

The base of most dispensers is linked to the pump and may be removed to fill the reservoir. Under the sink, the reservoir is threaded. A mounting nut, as well as a rubber or foam washer, will be included to secure the dispenser in place. In the hole you bored, place the pump.

Attach the soap reservoir beneath the sink using the mounting nut or gasket. After that, spin and tighten it alone using your hands. Finish threading the nut into place using a wrench or pliers.

Step 4: Sew the soap container together.

To secure the bottle in place, insert it in the nut hole and manually tighten it. Finally, place the pump in the hole.

What is the purpose of an automated soap dispenser?

Motion sensors are integrated into automatic soap dispensers. As soon as a user place their hands beneath the soap dispenser, the soap begins to flow out of the pump. This is a way that does not need any touch.

If you wish to utilize soap dispensers in a more sanitary manner, you’ll need an automated soap dispenser. Because you don’t have to contact the pump, there’s no risk of germs spreading to your hands or the dispenser. Automatic soap dispensers are common in public and business restrooms.

Although the current techy dispenser is entertaining to operate, it does have a few drawbacks. These soap dispensers are powered by a battery that depletes fast if they are used often. Additionally, there will be additional fees each time you need to replace a battery.

Is it worthwhile to invest in a kitchen soap dispenser?

Kitchen soap dispensers, whether manual or built-in, are a welcome addition to any sink. There is no need to constantly refill a container of liquid soap if you have a dispenser near your faucet.

It allows you to keep your dish soap close to the sink while still concealing it. It also helps to keep the sink clean. An appropriate dispenser will also add elegance to your sink.

A kitchen soap dispenser is required if you want to use liquid soap for dishwashing. Most contemporary soap dispensers allow you to fill it from the top.

This eliminates the need to refill the bottle every time it runs dry. Soap dispensers are well worth the money, given how handy and inexpensive they are.

Should I acquire a soap dispenser that’s built-in?

Top filling systems are also simple to operate. The installation procedure is very straightforward and takes just a few minutes. You may also place the soap dispenser anywhere you want it, near or far from the faucet.

What are the benefits and drawbacks of built-in soap dispensers?

While built-in soap dispensers offer a lot of advantages and are a terrific kitchen accessory, there are a few downsides that consumers are concerned about.

What causes soap dispensers to malfunction?

If the pump on your soap dispenser becomes jammed, it may cease operating. When you push the dispenser’s pump, it will not retract in such an instance. A damaged pump spring or damage within the dispenser tube might also be the cause. If the spring within the pump is damaged, remove the reserving from the cap and replace it.

If the pump becomes clogged or foamed, the dispenser will cease operating. You’ll need to clean the pump and unblock the tubing in that instance. Remove the cap and tube from the container and disassemble it. Soak the dispenser tube in hot water for half an hour after receiving it. Press a pump a couple of times while the pump and tube are immersed in water. Any foaming or blockage in the tube should be gone after that.

Get a new pump if yours is entirely busted!